1997 It all begins in the district of Oberkampf …

Valérie Carli is 30 years old. She left the hairstyle and runs a school bike but is bored terribly. Supported by her husband Christian, she decided to take over the hairdress and settle down on her own. They are therefore actively looking for a local and eventually settle down at 60 rue Oberkampf.
Hairdresser and barber Man of training, she dedicates this place exclusively to the male gente.She is looking for a name in her living room …
She does not just want to put her name on the sign … Family of three children, all hairdressers and bikers … She was inspired by the way of life of her younger brother of 10 years his youngest, she loves, Alexander … At the time it has the last Harley Springer 1340 BAD BOY … It is all the rage and she finds it fun!
Her salon will be called Les Mauvais Garçons.History can begin … It starts with two armchairs in a beautiful vintage decor, then the next year she adds a third.His fame and its success earned him some publications in the press and very this salon contributes to neighborhood life. The customers feel at home. At the time, barbers are few in Paris, there are two: Valerie Carli and Alain Barbier Master, the barber of stars …

In 2004, she gives the case to her younger brother, Alexandre.
He takes again the hand and continues developing this salon always in the same atmosphere and with the same know-how.

2007, the BHV Marais launches the BHV MAN at 36 rue de la Verrerie, a new avant-garde concept store where men are honored.
Beard is back in fashion and is very popular, the BHV Homme wants to offer the services of a barber barber. The Bad Boys are approached for the opening of a corner in the new shop. Very quickly the concept knows a tremendous success. The press speaks about it … Les Mauvais Garçons have a new visibility. This place will be open from 2007 to 2012.

2009. Alexandre meets his wife Amanda, who then has, with her mother, a brand of Biological and Marine cosmetics exclusively dedicated to the man, distributed to the BHV.

2010. Alexandre and his wife adore “chiner”. They scour the markets and flea markets.
They decide to redo the living room. They are inspired by saloons 1930 and seek to give a true identity.
They love Parisian Zinc counters where morning coffee is sipped. The idea comes to them to make a work plan while Zinc and a counter “cash” inspired Parisian brasserie counters. The living room becomes a real friendly place where all objects are vintage. They take the opportunity to add a fourth chair.
The place now attracts some photographers in search of atypical places for different shooting which gives an even more important visibility.

2012 is also the year when the brand will release a new product, a moisturizer for men bio-marine.

– The opening of a corner at Hackett London at 37 Boulevard des Capucines. This luxury London clothing brand already has several barber shops in London in their various boutiques. They want to duplicate the concept in France in their biggest store. This venue will be open from September 2013 to October 2015.

– Hachette publishes a book in collaboration with Marc Aumont journalist and Les Mauvais Garçons …
“Barbershop, the art of ordering his hair” is released on September 15, 2013.

2016. Following a major commercial disagreement with the management of the Le Bon Marché store, Les Mauvais Garçons will leave their current space in the first half of 2016.

2016. As demand grows stronger, Les Mauvais Garçons creates an annex to the Barbershop of L’Original Oberkampf. They decide to refocus on their favorite neighborhood Oberkampf / Parmentier. 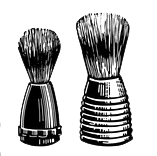